We’re four days into a fortnight-long initiative being touted as the world’s largest art show. Called Art Everywhere and supported by Innocent Drinks’ Richard Reed, the Art Fund, Tate and the poster industry, the project has seen 57 works by British artists appear on billboards, bus stops and black cabs around the UK.

Until 25 August, 22,000 advertising sites in England, Scotland, Wales and Northern Ireland will showcase contemporary, Modern and pre-19th-century works chosen from a long list of 100 by members of the public ‘liking’ their favourites on Facebook. We love the idea of great British art being celebrated and shared, so it’s hardly surprising that Art Everywhere has been a hot topic of conversation in the Lund Humphries office this week.

What follow are some thoughts on Art Everywhere from Lund Humphries’ staff and friends  – what we were surprised to see included, the works we feel were overlooked and where we’d choose to install Art Everywhere works… We’d love to hear what you think, too, so do add your comments below.

I think one of the really interesting things about this experiment is that it reinforces the fact that there is, always, art everywhere. Those of us who live in an urban environment are surrounded by the designs of great architects (and lesser ones), we are presented with billboard advertisements for art exhibitions that display artwork often with great impact (especially on the walls opposite platforms in tube stations) and, just occasionally, even product advertising veers into the arena of the art world (the 1980s Benson and Hedges campaign springs to mind). There are also of course the icons that are part of London’s urban furniture – Giles Gilbert Scott’s telephone boxes, Routemaster buses and innumerable architectural details in any number of glorious buildings – but it’s not hard to find man made beauty in less conventional places either. As I was walking out east along the River Thames earlier this week I could see what Prunella Clough saw in the disused dockland cranes and industrial wasteland of parts of the East End. Would it be facetious of me to ask for a huge poster of Clough’s Cooling Tower II (1958) to be erected somewhere in central London?

I’d have chosen a few lesser-known names and works – the current list is just all a bit predictable. This initiative should have been about expanding the repertoire of art in the public domain. Why not include something by figurative artist Tom Hammick, for instance? He makes exquisite pictures you want to live with. I went to his recent show at Flowers in Cork Street and fell head over heels with Circus, Glynde Gap (2007/2013), a kind of dream-like scenario that manages to capture both the strange and familiar. As far as installing an Art Everywhere work somewhere… why not put Bob and Roberta Smith’s Make Art Not War in Nahda Square, Cairo, or in the room where the Israeli and Palestinian peace talks are currently under way? 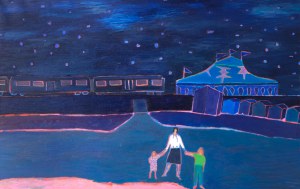 I don’t think Gassed is sufficiently representative of Sargent; I think there should be one of his portraits (perhaps Lady Agnew), or the Tate painting of the children with lanterns (Carnation, Lily, Rose), as well. Missing from the list (in no particular order, and off the top of my head), are: Dante Gabriel Rossetti (I’d go for Beata Beatrix); Edward Burne-Jones; Frederick Leighton; Lawrence Alma-Tadema (though he wasn’t born British). Limited period, I realise! As for contemporary artists, he isn’t so well known as the YBAs, but for me, nobody beats Andrew Gifford. He can paint an industrial landscape in such a way that one is moved to tears by its beauty. He is today’s master of light.”

I would install Grayson Perry’s Map of Nowhere on the large billboard hoarding above Old Street roundabout. Perry’s modern day mappa mundi is a satirical commentary on current living where newly coined terms such as ‘having-it-all’ and ‘kidult’ surround the artist in his representational world. As well as reflecting (and ridiculing) our modern existence,  Perry also pokes fun at how seriously the art world can take itself with a large shaft of light coming from the artist’s bottom.

I thought Art Everwhere was a terrific idea when I read the Guardian supplement about it a few days ago, and it includes many of my favourite artists and in a  few cases, such as Burra, my favourite images within artists’ work. I was rather surprised at the Stanley Spencer chosen as it is by no means one of his best known canvases; while on the other hand it’s good to see choices different from the conventional ones. The Nash is a great choice and will make an impact. I was surprised, and sorry, to see that Henry Moore doesn’t make it at all. It will be interesting to see what people think in St Ives, as the Cornwall contingent has not come out very strongly in the list which I am sorry about because there’s feeling against non-figurative art. 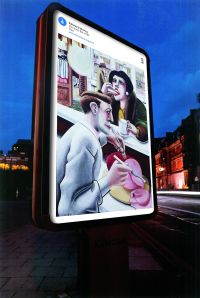 I was surprised to see Pre-Raphaelite images of tragic women claiming the top two spots. What is it about the work of Waterhouse and Millais – dense, decorative, deeply romantic – which continues to capture the British imagination? The list held other surprises, too, not least in its focus, overall, on work made post-1960. I would have liked to have seen the inclusion of more sculpture and more photography. While it’s great to see a good number of female YBAs make the short list, their lens-based work (highly self-conscious/performative pieces, often exploring identity politics) represents just one facet of a diverse and challenging medium. What about work by an earlier generation of social documentary photographers, such as Bill Brandt or Tony Ray-Jones? Or the Deutsche-Börse-Prize-winning War Primer 2, London-based duo Adam Broomberg and Oliver Chanarin’s conceptualist reworking of war reportage? 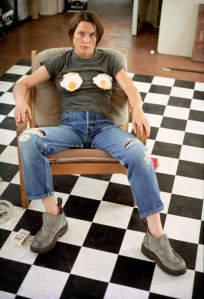