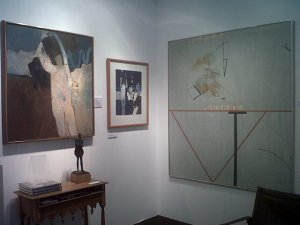 The official message from London Art Fair, perhaps unsurprisingly, was one of strong sales and large numbers of collectors in attendance. Director Jonathan Burton emphasized that the Fair had fulfilled its remit, offering ‘a welcoming environment for buyers wanting to pick up the very finest in Modern British work as well as cutting-edge contemporary practice.’

Our investigations, however, uncovered more of a mixed picture. When asked how the Fair had been for them, galleries’ responses ranged from ‘very tough’ and ‘slow’ to ‘better than expected’ and ‘really good’. Everyone agreed that visitor levels were buoyant, especially on the last two days, but several galleries made plain the accepted truth that lots of interest doesn’t necessarily translate into lots of purchases.

Overall, it was felt that the Fair was a microcosm for the market for Modern and contemporary British art. Osborne Samuel, Portland Gallery and Redfern Gallery agreed that sales remain stable for works of quality, especially those that are rare or recently discovered. Beaux Arts London pointed out that there is also movement at the other end of the market, with collectors taking small gambles on accessibly priced work by emerging artists as well as seeking to invest in ‘Blue Chip’ pieces. The losers in this situation, of course, are mid-career artists, whose work tends to command higher prices but whose long-term value is felt to be less assured. This, all the galleries contended, is a direct result of the wider financial turmoil. The adjective ‘cautious’ was oft repeated as galleries described art-buyers in 2013; the confidence and associated impulsiveness of the pre-credit-crisis era has yet to return while the practice of investing in art to try to better the returns available from standard financial products has also all but dissipated.

Still, there is much hope for the future, both in terms of the year ahead and the longer-term outlook. Osborne Samuel stressed that now is a great time to buy, with a trend for realistic pricing meaning that there are ‘some bargains to be had’. Paisnel Gallery and CHARLIE SMITH london, meanwhile, underlined the growing international interest in British art, with buyers from Russia, Germany, South Africa and Australia amongst the biggest spenders at the Fair. Moreover, all of the galleries have exciting plans for the next twelve months. Highlights include John Piper at Portland Gallery in March, William Scott and Friends at Osborne Samuel in June and July and a John Carter RA exhibition at Redfern Gallery in the second half of the year.