Book of the Week: Patrick Caulfield Paintings by Marco Livingstone

In the stairwell leading up to our London office there is a poster reproduction of Patrick Caulfield’s painting After Lunch (1975). It’s an image which I pass several times a day, reflecting on its title as I return to the office with my lunchtime sandwich. What kind of lunch has just been eaten by the painting’s now-absent diners? I try to fill in the recently vacated picture-space with details of the meal which is now over, looking for clues in the sparsely delineated interior and what appears to be a brightly lit vision of a Swiss lake outside (or is the lake in fact a painting within the painting?). It eludes me every time.

After Lunch is one of the artist’s early works featured in Tate Britain’s survey exhibition Patrick Caulfield, opening today.  It’s a brilliant example of an art which ‘depends greatly on visual metaphor, on implication and absence, on visual clues that hint at things that are not overtly expressed, and which must be completed in the mind of the spectator’, as Marco Livingstone writes in his landmark book on the artist, my Book of the Week. The Tate’s show features about 30 paintings and I’m sure I’ll want to linger in front of each one, trying to decipher Caulfield’s enigmatic visual references.

Patrick Caulfield Paintings was published shortly before the artist’s death, when cancer had already taken hold of his voice.  Communication from him was on short handwritten notes, as concise as the language of his paintings.  It was strangely poignant that an artist whose work deals with unspoken absences had lost the ability to communicate through speech. But the paintings themselves continue to speak to us with his subtle wit, both challenging and entertaining us.  Marco Livingstone’s glorious book is a celebration of that unusual achievement. 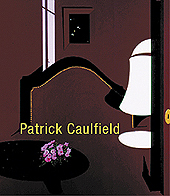