Book of the Week: Peter Blake: one man show by Marco Livingstone

There is so much of Peter Blake that it’s hard to capture in a single volume, but that was Marco Livingstone’s remarkable achievement in Peter Blake: one man show, my Book of the Week.  Originally published in hardback in 2009, and now available in paperback, it remains the definitive account of Blake’s art across all media, from the 1950s to the 2000s.  Touching on every aspect of this prolific artist’s work over the whole of his career, the author addresses ‘the most pressing and constant themes that have motivated Blake’s creative process and that, in turn, provide the most enticing points of entry for an audience waiting to be entertained, amused, moved and dazzled by its endlessly shifting facets’.

Within the pages of the book, Marcel Duchamp sits alongside Marilyn Monroe, the Mad Hatter alongside the Madonna.  There’s collage, sculpture, prints, illustration, album covers – and above all figurative painting, identified as the core of Blake’s artistic output.  It’s a fascinating insight into an endlessly creative mind.

When Marco Livingstone’s book was first published in 2009, Andrew Lambirth gave it a rave review in The Art Newspaper under the catchy heading ‘Pop art Peter perfectly pitched: This monograph on Sir Peter Blake is the defining book on the English artist’. We launched the book at Tate Britain in the early summer, with artist and author in conversation inside the gallery while Peter Blake’s ‘art bus’  – a mobile double-decker gallery and entertainment space designed by the artist – sat parked outside. At the end of the talk and book-signing, we packed into the art bus for the party.  In the whimsical, Pop-tinged world of Peter Blake, the art bus rolls on. 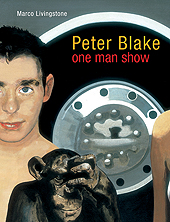 Special edition incorporating  a new screenprint, Roxy 2, produced by the artist in an edition of 100 exclusively for this publication and packaged with the book in a slipcase. 15 left in stock.  £500 / $1000