Julian Trevelyan: Picture Language – Philip Trevelyan’s new book on his artist father, and my Book of the Week – opens with an insightful Foreword by art critic Mel Gooding, who commends the book for  bringing out as never before ‘the double-sided aspects of Trevelyan’s artistic impulses’.

There is indeed a fascinating duality in the art of Julian Trevelyan (1910-88). Over 256 pages and nearly 400 illustrations, Philip Trevelyan’s personal journey of discovery reveals a complex artist, who embraced both the social documentation of Mass Observation and the dream-world of Surrealism; who responded to the gritty realism of the modern industrialised city and the romantic escapism of the riverside; who was fascinated from an early age by the complexity of machines and buildings and their construction, and was attuned to the imaginative power of poetry.

It’s very appealing work: what intrigues us, perhaps, is what Mel Gooding calls its ‘sophisticated innocence’. As Philip Trevelyan writes in the book’s ‘Final Words’, ‘they are pictures that may speak in a language of simplicity, yet pose questions that are more complex’.

Julian Trevelyan’s work has never quite achieved the popularity of that of his wife Mary Fedden. But with the publication of Philip’s new book, and an exhibition of paintings and prints opening at the Bohun Gallery, Henley on 23 April, perhaps Julian Trevelyan’s time has now come. He was elected a Senior RA in 1986, so it’s fitting that we’ll be launching the book at the Royal Academy tomorrow evening. 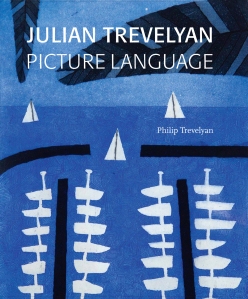