Andrew Causey describes Paul Nash’s extensive involvement in preparing the book on his work which was in the end published posthumously by Lund Humphries in 1948.

Paul Nash had been preparing for at least two years before his death in 1946 material for the book which Lund Humphries would publish in due course.  He collected black-and-white prints from owners, some of them images he had not seen since before the First World War.  And though he did not finish the project, he invested considerable time and energy in it, creating the skeleton of a book of which he may be considered part-author, and in which he could take much pride.

The cover of the 1948 book on Paul Nash, bearing the artist’s signed initials

The publication of Paul Nash coincided with a one-man retrospective at the Tate, an exceptional honour then for an artist of his age group.  The book signalled an advance on the conventional art book at that point: apart from the various authors’ texts, it contained supplementary information, including chronologies of Nash exhibitions and a list of Nash’s paintings and drawings in public collections in Britain and around the world.  It was produced under difficult post-war conditions, marked especially by the shortage of paper of appropriate quality.

The intellectual tenor of the book was set by Herbert Read, an intimate of the artist, who shared Nash’s pleasure in the early English watercolourists of c. 1800 and what Read described as the ‘English vision’.  In both artist and critic this response was combined with a ready acceptance of continental modernism, however much the historical and the modern seemed contradictory or irreconcilable. 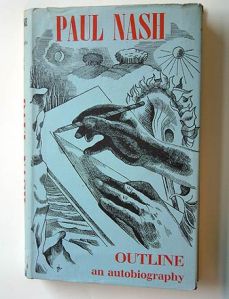 After Read, the writer whose contribution is felt most strongly was John Rothenstein – like Read, an old friend of Nash back to the 1920s and author of an essay here focused on the First World War drawings.  Nash had always been justifiably proud of his 1917-18 images from the Western Front, and Rothenstein’s evocative descriptions of the Flanders battlefields are the first texts to make use of the poignant letters Nash wrote to his wife Margaret in the course of his war service.  The letters were to be central to Nash’s autobiography, Outline, published in 1949 and now regarded as one of the finest pieces of writing, in fact or fiction, on the war. 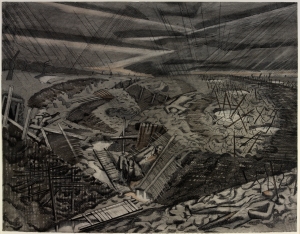 The correspondence during the Second World War years surrounding Nash’s assembly of plates for what was to become the Lund Humphries book, shows how highly he valued his early drawings made around the family’s home at Iver Heath and how much his emotions were stirred by reliving his early life through his drawings.  The paradox is that a book so personal to the artist and so full of references to his own life should not have been seen by Nash in its finished form.

Andrew Causey wrote extensively on 20th-century art and was the author of books on Henry Moore, Paul Nash (his most recent published in 2013 by Lund Humphries), Edward Burra, Stanley Spencer and Peter Lanyon. He contributed to exhibition catalogues on a range of artists and organised exhibitions at many venues including the Royal Academy, the Hayward Gallery, Tate and regional galleries and museums in the UK. He was Emeritus Professor of the History of Modern Art at Manchester University.